This, that, and the other

It's been hard to sit down and type - I want to be out doing things - it was very nice this past weekend. Outside in the fresh air all day, working with my hands amongst other folks working with their hands (some using tools, some not), taking walks down a dirt road, sitting around the fire at night talking and laughing while a couple of flintknappers worked some porcelain from an old toilet tank (don't ask). Fun with Mr. E at night in the tent. Very laid back (well, not the fun, hehe). I did finish a story, though it's still on paper.
Problem is, writers have to somehow put words down and for most of us that involves sitting. I've been resisting it today. But if I don't start typing, I'll fall even more behind than I already am. So. 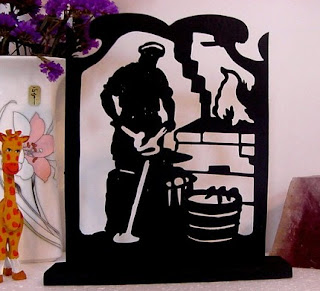 At Etsy
I have a lot of "irons in the fire" - which is fun to say considering Mr. E. was giving blacksmithing demonstrations this weekend. Just on the writing front - Got stories to finish and polish and get sent off in time. Stories to start (the ideas are rattling round my head making a lot of noise). I'm working on an interview (my firstest ever!) with Randy Lagana. There's a new Beginner's Ball in the works with a working title of "are we erotic writers contributing to the downfall of civilization?" I have a chapbook I'm working on (poetry stuff) and an essay (or two or three). And more. Oh, and blog stuff.
Over at the Trollop Salon today, Alison Tyler has an interview with Tiffanie of Metal Taboo, a very cool jewelry biz. In the comments I said I'd like to have one that says FUCK SHAME. I've felt a lot of shame in my life - and I'm fucking tired of it. It does absolutely nothing to make this world a better place. Recently - I don't remember where - I read something bemoaning that people don't seem to feel shame anymore. That shame is a good thing. I think they're confusing shame and guilt (not the same - that's why I linked the term). I'm pondering all this now - watch for a blog post if anything worth reading shows up.
I've also been pondering the subject of friendships. When I was a small kid in Philadelphia there were just the neighborhood kids and we just tended to run around together (back in the halcyon days when kids were allowed to wander a bit) - but I don't remember any special friends. Then my dad was transferred to California. I missed about a month of fourth grade during the move and it was well into October when I was "the new kid." But I was very shy and tended to hang back and just watch the other kids play. We moved a couple more times in the same year and it was like starting all over again. Then I'd make a friend and she'd move. Or a friend of several years (the 6th grade to 10th grade years) would turn into a willowy beauty and drop me (always somewhat plain) when the boys started coming around. That seemed to happen over and over. I didn't know what it was like to have a close close friend. Maybe because I was very afraid of letting anyone in.
Never was the outgoing type. Painfully shy. Bashful. Utter lack of self-confidence. Inhibited. Self-conscious. Wallflower. The list goes on. Luckily I did make some lasting friends as I got older - in college - or as a mom. There are a few people I've been friends with for a long time now. Hopefully they'll be lifelong friends. But there are plenty of friends that have dropped back or dropped away completely, some permanently.
One thing that always made friendship hard for me was I always felt that I had to be some certain way in order for the friendship to work. I couldn't/wouldn't be my true self. Part of that was I wasn't sure who my true self was. Or I did, and I was ashamed. Let me tell ya - it ain't fun hiding from your friends.
Last year I reconnected with an old friend, but in an open, honest way and it's been a life-changing experience. It helped me see that I no longer want to be only "part" friends - in other words, keep part of myself - an important part of myself - separate from the friendship. And I've had good close friendships falter when I've been moved past my fear to speak my honest mind. Talk about negative feedback.
So, as I've slowly made new friends, they get to see the whole me. And that has felt so good. But it's also been painful, because sometimes you lose a friend. And it's getting harder and harder to keep part of myself from old friends that never knew that side of me. 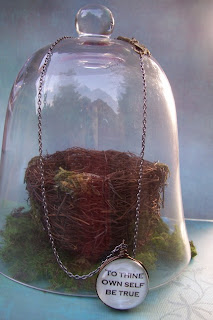 This necklace at etsy
I don't go running around screaming at the top of my lungs - I WRITE SMUT - but I refuse to be ashamed of it. I write a lot of other stuff too. And so I find myself contemplating sending letters (you know, real live with a stamp letters) telling old friends about what I'm doing and that if they don't think they can handle it, if they don't think they can be my friend - well then, better to know that now. It's a really scary idea. Don't know if I'm brave enough. Haha, which reminds me - someone landed on my blog by searching for "brave erotica robin" - I'm not sure what to make of that. I've never felt very brave, though I've survived a lot.
Not sure I've made any point here - it's been mostly rambling. For some reason I want to leave you with Joan Jett (yeah, been listening to her alot).
Posted by Erobintica at 3:29 PM

Email ThisBlogThis!Share to TwitterShare to FacebookShare to Pinterest
Labels: not sure I want to label this one

I know what you mean, Robin, and can empathize wholeheartedly.

The reaction was kinda cool. Granted, all those people were strangers to me, but it was neat nonetheless.

I wish you weren't so far away. My husband would love to attend the blacksmithing demo and I want to learn flintknapping.

I love primitive stuff. I do know how to skin a rabbit, that counts, right?

That is an exceedingly cool experience! Good for you! So what exactly was the reaction?

Yeah, flintknapping is on my list of want-to-learns. I started work on a bow. Hubby has made a number of them, but I've never tried it (have never felt focused enough) until this weekend. When it's done I'll post a picture.

And skinning a rabbit counts for sure. Yeah, wish you weren't so far too.

Thanks for sharing this, Robin. I feel a little quiet right now, but I wanted to say that.

I also want to thank you for this post, Robin. And very cool, Scarlett, that you had the courage to tell it like it is and met with a positive response :-)! Seriously I sense most people are envious of erotica writers--and they should be.

As always, Robin, so much of what you say feels very familiar. I moved around quite a bit as a child, five times, and sure it makes you more "flexible," but it also tears you away from friends and makes it harder to trust and have the kind of long term relationship that allows for a certain level of comfort, I think. Now I guess the flip side would be being stuck in the same stultifying place with the same boring people. But I am glad that so far my kids have been able to grow up in a stable, familiar situation.

And in most of my friendships over the years, I'd say I also hold part of myself back because I feel as if I have to offer more benefit to them or I don't deserve their attention and they'll leave me. It could be a female socialization thing? Fortunately as an adult, I have made friends I feel I can really talk to and be myself with, but there is always a sense of holding back certain parts of myself with certain people. It does make me feel sad, but maybe, as with lovers, there really are only a select few (one?) people with whom one can be truly intimate? And finding them is a rare gift. Maybe all the people who seem to have so many friends feel just as alone, appearances to the contrary? I always thought that extroverts are just as shy as introverts, it's just buried a little deeper.

Still, it is such a relief and a joy when a friend accepts the "ugly" side of you and reveals the same to you. Well, lots to think about, but as always, your posts really capture the process of self-discovery and true maturity. Thanks!

To answer your question, the reaction was just downright hysterical. One of the women at my table looked at me and went, "Really?" I nodded, and she asked if I'd been published yet. I said no, that I'd dabbled but just started taking it seriously, and that I chose my pen name over the weekend. She responded with a "Wow, that's cool!"

Definitely a nice reaction! I hadn't planned to say any of that, I mean, there's plenty of things I do that most don't expect from a desk jockey - raise my own food, butcher chickens(and rabbits), and so forth. Aiming for self-sufficiency give you an interesting skill set.

The instructor was suprised, and there was a chuckle around the room, and he asked, "Is that like dirty writing, only elevated?" I said sorta. He also asked if I was published yet and I said no, I'd be doing my first submissions over the summer.

Then he really made me laugh. "Well, you know, if you ever need a proofreader. . ."

To which I replied that I had plenty of them ;)

I don't know if I would have offered up that information if my boss had been there as planned, but it was definitely an interesting experience!

Donna, I do wonder if it's a female socialization thing. Guys have the whole "locker room" thing (true or false as it may be) - but I think many of us girls grew up never hearing anything like that. Don't talk about sex, don't write about sex.

And look at this! "Women Can't Write About Sex," Says Female Sex Writer

Scarlett - welcome back - that sounds fabulous! Wish I coulda been a fly on the wall! ;-)

Yes, Scarlett--what a debut! And free proof-reading services, too ;-).

Thanks gigi - but I beg to differ - even one piece of erotica makes you an erotica writer.