Putting on a face 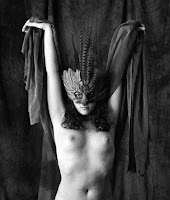 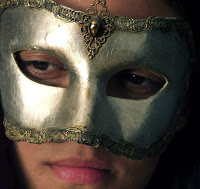 These two mask photos are by Randy Lagana. The bottom photo is by Self Timer of Mr. Erobintica & moi ala Halloween 2008 (the mask thing, get it?)
I am not on facebook. I have no intention of being on facebook. But I'm starting to feel a little bit like I did in 4th grade when, newly transplanted to the west coast from the east, I stood around the edges of the playground, lonely as hell and looking longingly at all the kids playing with their friends and feeling very much the outsider.
A few days ago I got an amusing email. It was from facebook, a reminder -
"Hi Robin, The following people recently invited you to be their friend on Facebook:"
Among those people were Susie Bright (whose blog I've followed since the very beginning) and Rachel Kramer Bussel. Both had okayed me as a "friend" back in February - I took Rachel's Erotica 101 class and met Susie at In The Flesh. Problem is, I'm not on facebook. And every time someone sends one of those "friend" things, I feel compelled to send an old-fashioned email explaining that I'm not snubbing them by not "friending" them, it's just that my face ain't in the book.
The same day (Sunday it was), there was a post on Greta Christina's blog saying she'd joined facebook. I remembered when Susie Bright joined facebook - she stopped posting to her blog as often, which made me sad. Granted, now her blog loads easier since there isn't a bajillion people looking at it. I enjoy reading Greta C.'s blog and hope she doesn't slowly disappear from it. Because I'm not joining facebook.
I have a lot of friends on facebook. One old friend uses a picture I took many many years ago as his facebook photo. Some love it. They can keep in touch with friends and old friends can easily find them (this could be a good thing or a bad thing, depends). Some only do it because they got talked into it by someone (spouse, friend, family member, colleague). Some hate it but do it anyway. And some, like me, don't do it at all. But many folks use it, often in exclusion to other means, of letting folks know what they're up to. As a result, they often expect everyone to know something - "well, I posted it on facebook" - assuming everyone is on facebook. But I have my reasons for not facebooking.
Why? Well, for one thing, two of my three children are on facebook. I actually heard about it when my then college freshman oldest told me about it when it was strictly a way to get to know other students at her college. Then it was a way to keep in touch with friends who'd gone to other colleges. It's grown from there of course. So, in my mind it is still a thing for college kids to do. It was built as such and I know folks work around those constraints, but I'm tired of trying to fit into boxes.
Also, I don't need ANOTHER thing to do. I'm having enough trouble keeping up with all the things I'm already doing (and enjoying). Also, there's the whole "real name" thing. I have my erotica "name" and my real name (which is my married name). Some folks get around that by being two-faced, which seems like a lot of work to me. I've already done that to some extent on my blog and I'm tired of it already.
Another thing - again - my kids are on facebook. And yeah, I know you can have all sorts of privacy things (they've already told me they'd never "friend" me) - but still.
So, I stand here at the edge of the chalk hopscotch outlines and 4-square squares, watching all those folks with their friends. Afraid to join in? Maybe that was it 6 months ago, but not now. I'm not afraid of someone finding out about my "other" life. In fact, the thought of folks being puzzled, amused, and maybe even shocked by the eclectic menagerie that makes up the group of people I call "friends" has a sort of twisted appeal to me. It's the reason why I want this button.
By not joining facebook, am I trying to hide? I don't think so. 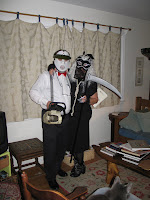 Posted by Erobintica at 2:19 PM

I admit, I am on Facebook. And in that double faced way as well. But, I have my reasons for that, and I reckon eventually I'll switch it over.

But I understand where you're coming from. My husband gets that "well I posted it. . ." thing all the time, though they're on MySpace.

And yes, it can get time consuming. I don't update daily, or even try. Some days I do things all day long, other times I go weeks without doing anything. If anyone really wants to know what's going on me they have my email, phone number, etc.

So, you're not standing outside the chalk, watching everyone play, you're hanging out over in the shade, leaning back, cool, confident, and in no need of other people to state your worth.

I was editor of my yearbook in high school...sometimes I think that "mindset" sticks with me. Cause I wander around, poking my head into everything. So, after I'm done playing hopscotch, can I come hang out with you?

Oh, I understand the reasons for the two-faced thing all too well. And yeah, I have to regularly remind my daughter that she has to send me "updates" the old fashioned way. ;-)

Facebook for me has actually drawn my attention to wanting to simply acknowledge my given name in the context of my pen name. It's not that I don't want to publish under my pen name, but I would like to simply acknowledge that, "And yes, this is my real name." Publish under Emerald and freely acknowledge that Emerald is [first name last name]. The reason Facebook has drawn my attention as such is that it won't let me have just a single name. :) So I haven't been able to join it as Emerald.

And of course I would like to be "friends" on Facebook with the writers I know who are on there. That said, I have not spent relatively huge amounts of time on Facebook I don't think. Heh, it hasn't been like when I joined MySpace, which I experienced for a while as ridiculously consuming/time-consuming. Perhaps it is because I have my own website now — seemingly the opposite of what you described in that that seems more interesting to me (my website) than Facebook.

Yeah, I hear you about wanting to be "friends" with other writers and such. I know that a lot of people use it as a networking tool. And I don't doubt it has been wonderful for a lot of folks. But I find I'm most comfortable here, which is very interesting to me and I'm learning a lot about myself this way. Tis all interesting. Thanks for commenting.

I hear ya on the whole Facebook thing. I didn't want to be on it, but had to finally create an account so that I could administer my organization's Facebook presence as part of my job. The problem now? It's all my work people, so I can't put any of my "real" life on there (poly, bisexual, kinky erotica writer) nor friend many people that I might find interesting, and thus make my Facebook experience more rewarding (possibly.) My workplace is the last place where I am not "out" ... :-(

PS- thanks for pointing out Susie Bright's blog--I've loved her writing for a long time!

(!!!) it would suck up a lot of time - and there's already way more that I want to do and try to do than I have time for. And the other thing - and I don't think I mentioned this in my post - is that you have to join and set up an account and all that in order to view anybody else's stuff. Whereas blogs are public - and I like that - no "members only" stuff - which has always ruffled my feathers. Anyhow, speaking of not enough time - I need to get a quick post up and get back to what I was doing before. Thanks for stopping by!

um, that was stupid - I somehow cut off the first few lines

here is if I can remember

Hi Jade. It must be hard with it being work-related. Possibly boring too. One of the objections I have that I didn't mention in my post is that I KNOW...