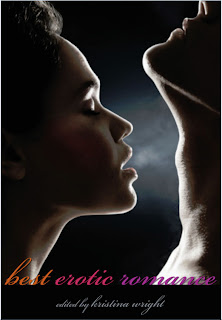 What Happened in Vegas     Sylvia Day

Another Trick Up My Sleeve      Heidi Champa

Once Upon a Dinner Date      Saskia Walker

To Be in Clover      Shanna Germain

The Curve of Her Belly     Kristina Wright

Yeah, I've decided to go with Blogger's "Adult Content" warning page, despite my not liking the idea, because of what I read here (about Google + and Google's NSFW issues). I am wanting my Erobintica blog to loosen up a bit, and I realized that fear of being shut out of here has kept me from doing that. Hence, not many posts of late.

So, yeah, I'm sorta pissed at myself for capitulating. I remember back when Alison Tyler had her blog reported and she put up the warning page and a bunch of other erotica folks did the same. At the time I wasn't being very daring in my blog, so I stayed open. But we seem to be going through another period of sexual hysteria (Emerald has a good Recommended Reading post on it here), and since I want to promote some stuff (announcement coming), without having to censor myself, I'm going to go behind the Content Warning door.
Posted by Erobintica at 11:42 AM 2 comments:

In the week since my last blog post (A lot to say, Part 1), I've read several things that have moved me and made me think. I finished up that post talking about how I'm still hesitant to be completely open about what I think of as my Erobintica work.

For instance: When I post something new here, I don't automatically  post a link to my Facebook page. Oh, I have at times when I've been posting poems, but when I'm writing real introspective stuff, especially if it has to do with sexual stuff, I don't tend to post those links. Why? I mean, I'm writing it here, for anybody with an internet connection and the ability to search to find. If you search for "euphemisms for sucking dick," or "cock" for that matter, I am the top result with this post. In an odd way, I'm rather proud of that.

But I don't go about boasting about it (well, except here) and I sometimes (often?) worry what people will think if they find out. I've yet to have a very bad reaction from someone, surprise yes, but I've yet to had to deal with outrage, or anything close. But I'm sure the day will come. And what will I do then? And why the hell do I worry about it so much??? I worry because I've seen what has been said about other women who have written (or spoken) openly about sexuality and I feel like I need to have the courage of my convictions before I go spouting off (to put it bluntly). As such, I'm a work-in-progress. But I also believe that nobody is truly ready for trouble, and I'm not getting any younger, so, what am I waiting for?

Last week, in the comments on Part 1, Emerald linked to an article by Dr. Marty Klein titled Censorship and the Fear of Sexuality.  (Other cultures too, but that's not the point of this.) The article starts out with this:

"Most Americans don't want to discuss sexual issues rationally. Their sexuality poisoned by the culture, they just want their emotional pain taken away. To people afraid of sexuality, censorship looks attractive."

Something else that Marty Klein said that I found intriguing was this:

"Because we live in a sex-negative culture, many people want eroticism kept private throughout society. This is their social policy response to their individual discomfort, similar to institutionalizing personal racism via the social policy of apartheid."

I've always wondered why I was vaguely bothered by the whole "TMI" response of people when someone reveals something about themselves that has to do with what I think of as bodily sexuality. Why is that too much information? Why is something that is so crucial to who we are as sexual human beings assumed to be something that shouldn't be shared?

When I write erotica, even as fiction, I am sharing a part of myself, sexually, with the reader. I can't help it. In order to write what I do, I have to think it first. And I'm thinking it because it turns me on. And while I have written vanilla, heteronormative, married characters erotica (back when just the act of writing down sexual thoughts felt transgressive to me), that's not what pushes my buttons and not really what I want to write these days.

So, should I, or other erotica authors keep these thoughts, these "stories" private, not share them, because they make someone uncomfortable? I talk about "eroticaland" and the folks I've met here fairly often. But right there I can see Klein's "aparteid" comment in action. This is the whole genre vs. literary fiction thing, but with the extra twist of private vs. public sex (which Klein talks about).

And I'm not just talking about fiction. I'm also writing personal essays (which my blog is mostly made up of if you think about it), and in those there's no hiding behind the "it's only a story."

It's almost midnight. I have lots to do tomorrow, so I'm going to stop here for now. But I'll be back with Part 3, in which I delve more into what Marty Klein wrote in this article.
Posted by Erobintica at 11:47 PM 1 comment: