A sorta kinda review of Stephen Elliott's The Adderall Diaries 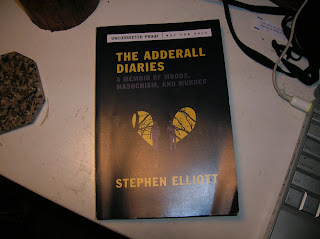 Yeah, I know. Three posts in one day. What can I say? It's been raining nonstop since I got up.

This isn't really a review of Stephen Elliott's The Adderall Diaries: A Memoir of Moods, Masochism, and Murder - I wouldn't know where to start. I no longer have the book - I got it via the Lending Library and had to pass it on to someone else (I think you can still get a copy this way). And I don't trust my memory past something that Elliott says at the front of the book - "Much is based on my own memories and is faithful to my recollections, but only a fool mistakes memory for fact." I remember that because it struck me so hard I had to write it down. There's a lot of lines in Elliott's work that make me want to do that. But I don't - I always hated taking notes.

I can't write a review because I can't with any certainty comment on something that was said on, oh, page such-and-such, because everything I've read by Elliott, or about him (see An Oral History of Myself at The Rumpus, where Elliott transcribes interviews with people he grew up with), tends to blur together in my mind. And I don't think that's his fault. It's how my brain works (or doesn't depending on one's viewpoint). And I'm not very eloquent, especially when I'm talking about something that gets me all fired up.

Why? Because there is something about the way Stephen Elliott writes that gets under my skin. In a good way. I've heard the terms "brutal honesty" and "slyly seductive" used to describe his writing. I've yet to be able to put my finger on just what it is that sucks me in. His writing jumps around, but that feels very familiar to me. In my experience, life is narrative interrupted.

Elliot writes with honesty. And I don't mean that in the tell-all talk show way (I can hear the voice-over now - overcoming a horrific childhood to become a celebrated author, blah blah blah). Horrific childhoods are a dime a dozen (unfortunately). But Elliott doesn't strike me as whiny or consciously trying to shock (both complaints that have been said about his work). It's more he just lays it out - this is how it was/is.

Then The Adderall Diaries came in the mail and I sat down to read. The book is about a murder trial, writer's block, drug dependency (the Adderall of the title), depression, sex, writing, memory, violence, parents, friends. It's about a lot more than that though. I'm sure his style of writing is not some readers' cup of tea, but I found myself falling in love with some of his passages. I'd actually stop and reread a paragraph or two because of the writing. I can't tell you what they were, because I don't have the book here and I don't trust myself to remember them right. There's a part where he talks about Sylvia Plath. I was almost tempted to type that up so I could reread it at my leisure, but I didn't because it was longer than I wanted to type.

But this bit I did type up - and for some stupid reason I left off the beginning of the sentence and I can't remember it now - "an epiphany to wrap things with a neat little bow. I searched for that in each of my novels, but kept coming to the same conclusion. In every book I ever wrote the point was to do as much as you could after coming to terms with your limitations. I can't wake up one day with a healthy relationship with my mother and father and a sense of abundance. I wake up instead and I think my father hates me, and I know that I am partly to blame." When I read that I thought "we're all fucked up - the secret is to embrace our fuckedupedness." Umm, don't ask me why I thought that - I just did.

There is a reason why writers often seem to have a "theme" running through their work. In "the old days" all that was covered up with metaphor. And while I love metaphor, I also love truth in all it's tarnished glory. Not "facts" but truth. I want to be moved when I read. And I was moved.

Reading The Adderall Diaries brought up stuff for me. When he wrote "I know everything there is to know about fathers who root against their sons" it brought up issues I had with my mom. When he writes about Adderall being the same as Ritalin it made me think of a good friend of mine and his adult-diagnosed ADHD (don't get me started - I have a lot of very strong opinions on the drugging of creative folks to make them fit into our society). When Elliott writes about consent (having to do with writing about people), I thought of all my hesitations to write my truth and the reasons/excuses I make for not being brave.

So I finished and sent it off to the next reader. I was sad to see it go. Our library had one of his other books - A Life Without Consequences - and I immediately checked it out. Am reading it now and liking it even though I think I've read him say that it's not very good (but my memory could be failing me there). I ordered two of his other books - Happy Baby and My Girlfriend Comes to the City and Beats Me Up. I bought his download Why I Write. Yeah, I'm on a bender. It's what I tend to do when I come across a writer that I like. And I'm so fucking glad I splurged and signed up for his workshop in NYC in August, though I do worry that I'll be disappointed - there have been times in the past when I've taken a workshop with a writer (usually a poet) that I've had a "writer crush" on and they turn out to be ... well ... not exactly whatever it was I was looking for. But I have no preconceived notions here, so maybe I'm okay.

I'm not sure when I'll be able to identify just what it is about Stephen Elliott's writing that gets to me. Maybe because I have those dark corners that I'm compelled to keep trying to see into. I want to decipher the cobwebs and divine the meaning in the dust. For that I need a lantern, a flashlight. And I have one, but I'm afraid to use it. Yet.

Stephen Elliott's not afraid to shine the light into those corners. But I have the feeling he's still trying to understand what he sees.

Posted by Erobintica at 4:48 PM

Email ThisBlogThis!Share to TwitterShare to FacebookShare to Pinterest
Labels: and this is enough posts for one day, Stephen Elliott, The Adderall Diaries

..i m so keen on to see/read what your stains and demons make you write..

Danielle - haha - were you reading that as I messed around with editing and stuff?

Thanks. Are you saying this was "beautiful"??? Okay, I will be good and not argue with you. But...

yes..beautiful insight.its written beautiful..because the post tells in a way more about you then about s elliot..:-)

Robin, thank you for this post. I'm not the only one gushing about Stephen Elliot anymore. Yay, fan club!

Stephen Elliot turns me on for three reasons:

He has, in his own words, eroticized his childhood traumas; his writing describes debachery and pain in a beautful poignant way and he's a submissive male.

P.S excuse the lack of appropriate punctuation in the last post, and also, did I even spell debauchery right???

You said that we would have to swap "kid" stories. Me thinks we have many more stories we could swap! :-)

I agree with Danielle. This is beautiful.

I love it when you go off thinking and share your thoughts, Robin.

I haven't had the pleasure of reading any of Mr. Elliott's work, but I think I might, now.

"we're all fucked up - the secret is to embrace our fuckedupedness."

How true is that?

It's early, and though I've been up for two hours my mind can't really express the thoughts there. But I'm glad you shared your thoughts on the book, the author, and look forward to check it out.

Fascinating post, Robin. I, too, scribbled down "only a fool mistakes memory for fact" and than read on that you did the same! I look forward to hearing about your workshop in August. I have a feeling it will not disappoint in some undefinable way :-).

Yes, we all have themes and it certainly has to do with our fuckedup-ed-ness. It takes courage to really hold that lantern into the darkest, moldiest corners, but certainly reading Stephen Elliott's work is a good start. There's no way it can't rub off, if only just a bit!

Anyway, you and Alana got me thinking and very curious to read more.

hmmm - I do appreciate your comments saying you like reading my rambling thoughts - because for too long I internalized the "nobody wants to know what you think" attitude (mindset? whatever). And then I read stuff that blows me away and I start thinking that nothing I write will ever compare and then I start thinking why bother? but I'm gonna bother.

robin..thats what we are here for in your blog land corner...we WANT to reak and know everything of those wonderfull, arty, edgy, strange, intense thingswhich wander and stroll through your head/mind..:-)

I recently came across your blog and have been reading along. I thought I would leave my first comment. I dont know what to say except that I have enjoyed reading. Nice blog. I will keep visiting this blog very often.

Thanks for the interesting review.--Neil Elliott