Hold out your hands. Palms up. Can you feel the weight of the world? 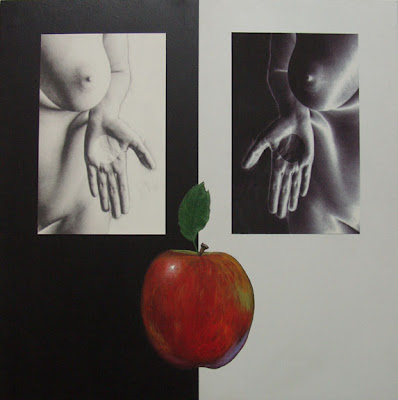 I've been pondering a lot lately. The times require it. And how to balance is weighing heavily on my mind. When I started this blog, I honestly didn't think many people would be reading it. I was wrong. Oh, I've yet to have a triple-digit day, and I have no fantasies of anything more than that. But that's not why I started this blog.
This is my think out loud space. If you're not interested, you can just click away from here. You don't have to read me bitch about a bad day or muse on losing a friend. But there's fun too - that's where the balance comes in. Like the Blow Hard Tour or leopard slug sex or having a story accepted.
The fun that I'm having as Erobintica seems to be doing a very good job of balancing any unhappiness that has come into my life lately. At times I'm afraid I should feel guilty for that. Shouldn't I be miserable? Sulking in the dark of my room? Tearing my hair?
Fuck no! Somehow, after 51 years
- of worrying what other people think
- of trying to please the unpleasable
- of oftentimes not liking myself
- of feeling ashamed and embarrassed at my own thoughts
I've decided that none of that matters.
Don't want to get to the end of life saying I coulda, I shoulda. The time of wishing for some elusive something to happen so that something else can happen - well, excuse me while I just go ahead and do stuff, without waiting for that slippery something to show up.
Yesterday several things happened (haha, there's a pun there somewhere if you've been reading) that made me think hard.
One was that yesterday was the start of the Blow Hard Tour and Sommer Marsden had made pins for us. I wore mine all morning while running errands. I'll wear it through April 11. I wonder if anyone will ask what it's about. (I'll tell them google it - hahaha) It may seem like a small thing (small and pink), but it's a big deal to me.
Another thing was that yesterday I picked up the unfinished quilt that I intend on finishing. My late friend and I (with some help from others) had been working on it to give to the girlfriend of another departed friend (too fucking many departed friends lately). I thought it would be hard to look at it, but it wasn't. Oh, I felt sadness. But something has shifted in me lately and I still can't find the words to describe what it is.
Then I read Donna George Storey's column over at ERWA. In it she talks about (among other things) that taboo topic of the tree's roots. And that made me think about why it is that I haven't been able to tell certain people, people important in my life, about Erobintica.
It comes down to this: I will lay claim to being a marked woman (ah, there's a reason I used Randy's piece above). Not everyone will understand WHY. But I'm beginning to get to a place where the silence is too loud. Randy's piece touches something inside me. I Love the apple (Eve anyone?) - the negative/positive, yin/yang, black/white, good/evil(?), right/left, life/death ... oh, I could go on.
Why a marked woman? Because from time immemorial, women who dared were to be feared. Like women who dare to write about sex in an honest way, even if it's fiction (and my apologies to the wonderful men out there writing, but it's not the same). Sex is dangerous. It can get you hurt, can kill you. Isn't that what the moralists tell us? Well, yeah. Some of us have been hurt by sex at some point in our lives. But some of us also have realized that it isn't sex that hurts. Silence hurts. Shame hurts. Ignorance hurts.
Writing down words that are meant to arouse is a transgressive act in today's society - still! - despite Dr. Ruth and Sex in the City (I never watched) and all the screaming headlines from the covers of grocery store aisle magazines. Admitting to any sexual thoughts outside the "norm" is considered both reprehensible and titillating (maybe that's the balance in action).
So, what to do? I've decided to be daring. Here's my hand. See? It's marked.
Posted by Erobintica at 10:25 AM

I'll take that hand and shake it.

I know what you mean, and after the last few weeks(between the Beginner's Ball and otherwise) I've started chafing. I'm proud of what I do. We are talented, we who write about sex and touch people. Brave and daring. But no one to be feared, unless you fear your inner fantasies.

Robin, whoah, what a powerful essay! The issues you talk about are as true and fresh for me, a supposed "veteran" erotica writer, and I thank you for articulating it all so well. Courage and daring against all the pressures to silence us, yes! Btw, I'm glad my column could be of some inspiration as well. I feel as if I only scratched the surface there, but if it helped water this lovely flower, I'm very happy.

Thank you for this inspiration to keep on going!

Thank you Donna. Haha - I was sure I wasn't being nearly as articulate as I'd wanted to. So much swirls through my brain at times that it's like trying to catch noodles in boiling water with a spoon.

And yes, keep going. Your next project sounds very interesting.

Robin,
I'm so glad you mentioned here that you wore your Blow Hard Tour pin in public. I wanted to tell you how proud I was of you for doing that. I know that took courage. Good for you, Robin.

Thanks Neve - but my turn is on Friday! *goes to quick double check before panicking*

Inspiring! Thank you for saying all this so beautifully.

Usually it's my more conservative relatives that ask me that, (typically at a family/friend gathering with A LOT of church people around) and in the past it would fluster me to have to answer them.

Whether or not they realize I'm telling them the truth, my answer usually stops them from asking more questions.

Whatever they think of me, I've got to be myself. And I admire you bunches for taking charge and standing strong. Keep on writing!

All I know is it's inspiring to see how much this short bit of time in this community of writers has changed my outlook on life. Though I guess I could say "I wish I knew then what I know now" - I'm glad that this is happening now.

I can relate to what you wrote. Absolutely. Randy asked what I thought about your poem, his image. I don't know where the melancholy comes from but here was my reply:

"Perfect words for the image. Her musings certainly ring true. Yes, women are always marked in some way, shape, or form. Some good, some bad, but sadly, always marked by someone other than ourselves. Where's the arrow? I looked for it. Beyond the periphery, I suppose. Waiting to pierce when you least expect it."

Must be the cold medication I'm taking...

I've heard many a writing teacher say write when you're sick - interesting things show up.

It's funny, that poem is maybe 5,6,7 years old? Can't remember - and I'm not real good about dating things when I work on the computer. I know I have it in a journal somewhere with a date. I hadn't "planned" to use it. But as I was looking at Randy's image yesterday, that poem popped into my head. And there's definitely melancholy in that poem.

I love what happens when using Randy's images. I'll chose one to use, but then when I start writing from it, often what comes forth is not what I'd thought I'd write about. For me, that's the magic of it. And why I keep at it.

And I have to say it's cool hearing what the artist thinks about the pairing of image and words - which is why I want to use images like Randy's.

beautiful. poem, pic and post. good for you. do whatever calls to your soul. it's all any of us can do, really. maybe it takes a brigade of brave sex writers to make it okay to write (and read) about sex. and have tons of it of course ;)
xoxo
s
p.s. am tickled *pink* to know your little button means so much to you and got to run errands with you. that makes my week!

Thanks Sommer. Hehe - a brigade of brave sex writers - love it!

As for my pink button (tehe) - I'm still waiting for someone to ask me about it - but I really doubt anyone will.

I found this beautiful, Robin, and not just what you said but also the energy I felt in it — from which it was coming. Congratulations. I feel like that is warranted because it just seems like you are appreciating yourself, and it strikes me as beautiful. I don't feel very articulate about it right now, but I just wanted to express appreciation here for your sharing and respect for your Self.

Emerald, thank you. You're plenty articulate - besides, it's way early in the morning. Yes, I understand what you mean about the energy. And yes, I am appreciating myself, and others, in a way I haven't before. It's all very interesting.