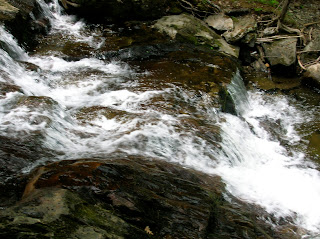 It's turned chilly. The leaves are falling. Weeds are dying back. We may have some snow flurries this weekend. The end of the year will be here far too quickly.
When this year started, I had so many plans. Basically, almost none of them have come to pass. It's been "one of those years." Now it's almost November. Not much time to catch up, even if my life was all leisure and ease. Which it's not. Doesn't help that I beat myself up for procrastinating and not following through and being afraid. What happened to the Erobintica that posted things like this, the post with the most hits over time on my blog? Well, I'm more than just her, and life has left little time for her.

This  hasn't been a completely wasted year. I have had a couple of acceptances, and nice things have been said about the stuff that was rejected. I've not written much at all, though I guess what I have written is good (because of those acceptances and comments). I have lots of ideas. But no focus. At times I want to throw up, throw up my hands, or just throw in the towel.

But I won't give up on this. Not sure why. Or maybe I am. This blog got started partly as my reaction to the giving up of a friend. Quite literally. He gave up. And because that's where this blog comes from, in part, I find I refuse to give up.

And I'm going to submit to Joan Price's anthology.

As we "de-clutter" [read: MASSIVE] in preparation for putting our house on the market so we can get our asses up to Maine (see picture above - that is what I could be looking at most days), I hope to find plenty of inspiration for writing. And maybe it will have to wait till next year. But I'm not giving up.
Posted by Erobintica at 9:48 AM