Letting go of the old year

Whoa. It's December already. It's been more than 2 weeks since my last post. Unintended.

I have more good stuff to announce, but that will be the next post, about looking forward to next year. This post is about letting go of the old one. 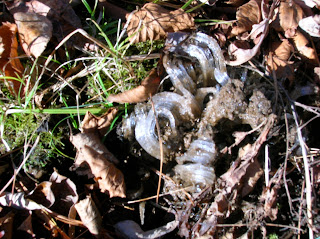 Back in late October I wrote about how this year seems to have been a lost year. In many ways it's also be a last year. Next year is truly going to be a "new" year for me. And as I stand on the brink, frost crunching under my feet (figurative frost - it's actually raining and almost 60 degrees!), just beginning to lean into what is coming, I've been slowly prying my fingers away from what I've been holding on to.

Next year is about moving. Moving on, moving forward, moving in new directions, moving towards something rather than away. Moving rather than being frozen in place.
Posted by Erobintica at 1:43 PM

Email ThisBlogThis!Share to TwitterShare to FacebookShare to Pinterest
Labels: letting go, moving on