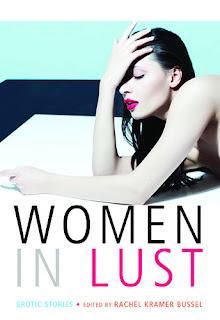 Most of the definitions I found of the word lust were somewhat unsatisfying and bland.

Until the one at Wikipedia: "Lust is an emotional force that is directly associated with the thinking or fantasizing about one's desire, usually in a sexual way."

Lust is most definitely a force. A force to be reckoned with.

Lust is a craving so strong that reason flies out the window.

Lust makes us do and say things that make us shake our heads and say "Did I say/do that?"

For those of us who are Dante's Inferno fans, our lust can send us straight to the second circle of hell, to be endlessly tossed around by "the terrible winds of a violent storm." Yup, sounds about right.

But one link led me to Valentine de Saint-Point's Futurist Manifesto of Lust, where I found my favorite definition of lust:

Lust is the expression of a being projected beyond itself. It is the painful joy of wounded flesh, the joyous pain of a flowering. And whatever secrets unite these beings, it is a union of flesh. It is the sensory and sensual synthesis that leads to the greatest liberation of spirit. It is the communion of a particle of humanity with all the sensuality of the earth.

The women who lust–Donna George Storey's Natalie, Brandy Fox's Brooke, Elizabeth Coldwell's Barbara, all of the women in this anthology–would embrace that definition wholeheartedly.

Over the course of the day, today, I'm going to come back and post a couple of lines about each story in the comments (a comment for each story). I'd post them all at once here, but it didn't occur to me till just now to do that as I read. I never liked taking notes while I read because I like to lose myself in the story.

For more about this book, go to  http://womeninlust.wordpress.com/about/.

The full Women In Lust Virtual Blog Tour schedule is at that link, with links to past and future posts. It's running for the full lusty month of November, with a trickle over into December. Reviews, interviews, and who knows what's to come?
Posted by Erobintica at 9:27 AM

I think I'll work backwards, because I read the book cover-to-cover, finishing up last night with Donna George Storey's "Comfort Food." Which gave me a midnight hankering for butterscotch pudding!

Most of Donna's stories revel in the sensuality of food as well as sex, and this story particularly. She brings scents and flavors to life. I could taste the blackberries that Joseph was picking.

But what really hooked me about this story was Natalie's oh-so-human reaction to an overseen/overheard exchange between Joseph and a waitress in the kitchen. "My first impulse was to slink back to my room." That section of the story made the ending all the more sweet.

This week I'm going to have to come up with a low-carb version of butterscotch pudding to satisfy this craving that Donna's story has left me with. ;)

Thanks so much for this post, Robin. I love the definition of "lust" that you chose. So many possibilities!

Ah, yes, pudding. Butterscotch being the standout of the triumvirate (vanilla, chocolate). This story was inspired by, among other things, a dish of butterscotch pudding I had a fine restaurant, probably all cream, but I've made decent homemade ones with 2% milk. Eaten slowly in small bites, it's not too evil ;-).

Donna, it's not the cream I have to worry about, but the sugar. Good, grass-fed, heavy jersey cream is good for you! If I succeed at making something, I'll let you know.

Next was Shanna Germain's "Beneath My Skin," a kinky tale in which a "small black knife" is an integral character. The narrator has a lust for knives, and fear.

A few lines I loved:

"Now," he says. "Tell me why you're scared."
***
"We are in what we call a sinship. It's like a relationship only without the bad parts."
***
"And then I am still, not just the outside, but the inside, in that place that never, ever quiets."

I don't want to say too much about this story, Don't want to give anything away. But a story that can creep you out and turn you on at the same time, is worthy of lust.

"Strapped" by K.D. Grace, opens with the line "When I see him eyeing me from across the room, my stomach drops to the floor, and I wonder if he knows."

Knows what? I was instantly drawn in. This story tapped into one of my own fantasies, so I particularly enjoyed it.

In Justine Elyot's "The Hard Way," we get a variation on the good cop/bad cop scenario.

"There is Blake and there is me, and we are on a bed. The situation has changed, as has the dynamic, but the question remains."

I loved the subtle humor in this story. When Ellen is questioned, "You stand accused of stiff nipples... What's that all about, eh?" I laughed out loud right along with Blake at her response, "Ask forensics."

"Rain" by Olivia Archer, caught me by surprise. Expecting something weather-related, instead, Rain is the unusual name of one of the characters.

This story has disparate best friends (Jess, the main character, and Marcy), a "weathered" marriage (Jess'), best friend's boyfriend (Rain) and mutual lust (Jess and Rain). It also has a lot of tension.

My favorite line? "His perfect wife is perfectly perverse."

At the rate I'm going, I may not be able to get to every story TODAY, but I will most certainly hit every story.

So much to do!

Jacqueline Applebee's "Orchid" is fun, ice-cream-sundae of a story, is hot and humorous. Katie Raspberry ripple (with sprinkles!) has a crush on Viktor Vanilla. Her friend Peggy's constant warnings are hilarious:
"Vanilla!" I could still hear Peggy's voice. "He will laugh at your floggers. He will pour scorn over your spreader bars. Stay away from him."
Of course both Katie and Viktor come to appreciate different flavors.

"Ode To A Masturbator," Aimee Herman's wonderfully-titled story, conveys the obsessive impatience of the main character so well. "I was tired of waiting, fantasizing, overstimulating my imagination. The encounter with your wife was awkward and uncomfortable and I was running out of time here. She may have even said something to you, outing my perversion."

Aimee is also a poet (I've heard her perform before), and that shows in her use of words–"blonde with enough curves to appear like a cursive lowercase q"-is probably my favorite line. I'm not sure why.

Oh my. I've still got a dozen stories to go. Well, this will obviously be a days-long project.

I think that tomorrow I may write about why I didn't submit a story to this anthology, which is something that's been on my mind today.

Ohhhh my. And the spamword is "misterma" -- need a few moments, to take this all in! Did somebody say Butterscotch pudding?

Thanks, Robin! I'm actually holding off on reading your comments (how convenient for me that you separated them into the comments section, lol) because I haven't quite finished the book yet and don't want to bias myself. :) Glad we're on this book tour together!