Do I revive this blog? 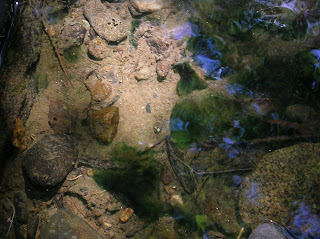 Since April ended, I have only written eight (8!) blog posts here. The reasons are numerous. And now I've gotten out of the habit of writing posts. And that makes it harder to pick it up again. And I've wondered whether that means that this blog's days are past. And that makes me sad. And sort of angry.

Why angry? Because I let this happen. I could point to this and that and the other in order to fix blame. But it simply comes down to this. I did not make room in my days to sit down and blog. And this wasn't always consciously. I'd have "write blog post" on my to-do list, but would always find some excuse to skip over it. Eight posts in four and a half months. And two of those months there was only one post!

Had this blog become unimportant to me? No, not at all. I take pride in the nickname Erobintica. I've made some very good friends through this blog. I've taken steps that I never would have without it. But I still have such a long ways to go.

This year is a year of transitions for me. Notice the word "smooth" is missing from that sentence. The way does not seem to be paved. I could make some four-wheeling comment here, but I won't. But I do need to keep moving.

For a bit, I pondered just closing up shop and dropping out of sight. I'd found that I was afraid to write what I wanted to write because... I want people to like me and it occurred to me that if I wrote as honestly as I wanted to needed to, that I could/would alienate not only strangers and acquaintances alike, but even the very people I love (and who love me). Yeah, wanting to be "liked" can be a huge hindrance. Limiting. Inhibiting. Paralyzing. I'm not sure I'm strong enough to say "fuck it all I don't care what anybody thinks!" Not sure I want to be though. Caring is what makes me me.

I honestly don't know what I'll be like in this next stage of my life.

So, possibly against better judgement, I've decided to revive this blog. I'm going to try to not let my low stats get to me. I'll try not to let a lack of comments get to me. I've always had a terrible case of no comment = negative reaction. Just ask the folks closest to me. Ha! It would be so nice to get a little bit of self-esteem before I'm history.

I have no idea what this revived blog will look like. I probably won't change how it looks right now. That's partly because I know that changing things always screws something up and I'm so fucking particular that I would waste inordinate spans of time trying to fix some mess-up in an innocuous post from 2 years ago that nobody reads! Also, I like the way my blog looks. Even though it's one of those black-background themes that so many people don't seem to like (hard on the eyes, pretentious, what-have-you).

So, welcome to my "new" blog. Erobintica.
Posted by Erobintica at 12:23 PM

Email ThisBlogThis!Share to TwitterShare to FacebookShare to Pinterest
Labels: Erobintica, navel-gazing, to blog or not to blog

A comment: at the end of the day, a blog of this ilk is for the writer, not the readers. Comments are nice, but I notice people are blogging far less now than they were, and lots of people have run out of time and energy for the social aspect of blogging, or just moved on, or whatever. You can't let comments be your motivating force, believe me.

One thing I'd suggest is, when you are having trouble feeling motivated to write (published work/blog/poetry/whatever) this sort of space is always good - not to write about not writing, which I find is a bit redundant for me - but to just write something - oil the writing muscle up a bit, even if it's just a few lines of observation or something pretty or true.

LOL. Yeah. I have noticed the conversation aspect of blogs has dropped, and while that has had an influence, I don't think that's all it's been. I think it's mostly been internal for me. But I project real well, LOLOL. ;)

I like the idea of using this place to "oil the writing muscle" - it did used to serve that purpose (though not intentionally) - time for it to do so again.

I, for one, am glad you're keeping it open. It's been on my blogroll for quite some time now.

Well, this is my second attempt at leaving a comment ?damn smartphones): I was just saying, glad you are blogging again, and I fully expect to see some raw, unadulterated filth in the neat future (let's see some of that writing that you're sure will horrify and drive us all away). Write what you need to write: not much point in writing anything else!

Keep going. Do what you're inspired to do, and hear, hear to not worrying about comments and such.

I'll continue to stick with you, for what that's worth...

I'm glad you're back.