Not enough for No on 1 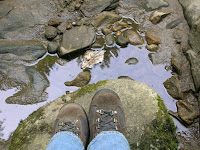 Even though I am not a Maine resident - yet - I watched yesterday's election - mainely (ha, yeah, a pun) Maine's Same-Sex Marriage People's Veto, Question 1. Sadly, the results were not in the favor of the No on 1 folks. The results were close - last I checked they were 53 percent for and 47 against (in other words 53 percent against gay marriage). But I'd been hoping that Maine would make me proud to be a future resident. Since I live in a state that allows gay marriage - and duh! the world didn't come to an end - I've watched other states struggle with this. It makes me sad. My oldest daughter did some work for the campaign (for same-sex marriage) years ago, when she was at college in Maine, that this election overturned. If they're still at it when we get to Maine (a few years away still) - you can bet that I will volunteer my time so that those who want to marry can.
Posted by Erobintica at 6:50 AM

Email ThisBlogThis!Share to TwitterShare to FacebookShare to Pinterest
Labels: why do the bad guys always have more money?

We just have to keep fighting the good fight, Robin. I'll be right there with you.

Someday . . . . we just have to keep believing. Even though it's hard right now.

I just came from Heidi's where I left a comment on this topic, but suffice it to say, I find the news very sad indeed.

Laws one way or another you can just keep on living the way you want to.

It's really a shame. Even the wild west got pseudo civilized by the self-righteous. Maine too.