I was fired for "insubordination" from the very first real job I held. Though I wasn't told that at the time. I'd worked there for two and a half years, starting part-time while still in college and going full-time when I graduated. It was just a file clerk/errand-runner job in a huge law firm. As far as I knew, I was well-liked and applied myself to the job with the 'no matter what you do, do it well' philosophy that I've always believed. I don't do things half-assed. Yeah, I fall down a lot, but I get back up. Sometimes I dust myself off, sometimes I don't. A little dirt never hurts.

It was the end of a Monday afternoon, everyone leaving for the day, when the office manager called me in, and proceeded to tell me "we have to let you go," and that I was really over-qualified for the job, and I should have no problem finding a job in my field. Yeah right. I'd just graduated six months before with a degree in Geology and I'd kept working the file clerk job hoping to save up enough money so I could hit the road in my old VW camper van looking for a job since I was lucky enough to finish up with school just as all the likely jobs dried up. It was the times. I'd had to move and get rid of my VW in those six months, I had rent and other bills to pay.  Needless to say, I was stunned into silence.

The real reason I was fired is probably a couple of reasons. They were probably paying me too much for the job, but they'd just given me a large raise two months before (in a fit of -we're expanding and doing so awesome that we want to reward everyone even though we really can't afford to-ness). And, I'd been working there long enough to feel comfortable with everyone, and since I don't have a single shred of reverence for hierarchy, I worked with a familiarity with everyone that, until a couple weeks before, had never been questioned.

One of my jobs had always been to take sandwich orders from the lawyers working on their lunch hour. I'd go office to office and ask. Never a problem with that. For two and a half years. But at some point, after the office expansion and remodel and new names added to the masthead (then up to six - I can still rattle the list off like it was yesterday - but I'm not typing it here), one of the newly promoted (though not to the masthead and maybe that's why) lawyers decided he didn't like being approached in his new corner office by a lowly file clerk, and it was decided I should go through the secretaries. But because I wasn't invited to the office meetings where new office procedures (aka RULES) were announced, and nobody told me afterwards, one day I went in and asked him for his sandwich order. Silly me. He didn't get angry or anything. Just told me that I needed to go through his secretary from now on. Huh? It made NO FUCKING SENSE to me. But I complied. Still, I was soon out of a job.

When I went for unemployment was the first I heard of the "insubordination" charge. I told my side. The unemployment folks believed me but told me the law firm might fight it. They didn't. I think they knew. I learned a valuable lesson then. Though some folks might say I didn't learn anything, LOL.

I remain insubordinate.  Hierarchy be damned. Gets me in trouble time and time again. People love their hierarchies, their chain-of-command, their power. I hate them. And have been known to disregard them time and time again. And while I'm in the middle of it, I can be a basket case of self-doubt. What are you doing Robin? You'll get yourself fired. You'll get your husband fired. Your family will hate you. Your friends will desert you. But looking back on all those times, I don't regret a single one. I'm glad I stood my ground. It may not have worked out. And yeah, I've thrashed a bit in my disappointment.

This is a bit of thrashing. It's hard for me to stand my ground when people I care about see things differently. I am a child of alcoholics, always wanting to keep peace, sometimes at any cost. The cost has been too high at times. And now I am old enough to realize that it's time to live my life as I see fit, as I want to. The signs are everywhere, popping up in front of me and to each side. Signs are what we make of them. I am seeing. I am listening.

I started reading Cheryl Strayed's Wild, about her trek along the Pacific Crest Trail, after picking it up at a reading of hers. You know how sometimes the perfect book to read shows up at just the perfect time? After the reading I had her sign my "Write Like A Motherfucker" mug.  Yeah, signs.

I'm sure I will piss many people off. Make just about everyone uncomfortable. I also know that I'll backslide. A lot. But I will pick myself up and go on with skinned elbows and knees. And I will love big and aim true. 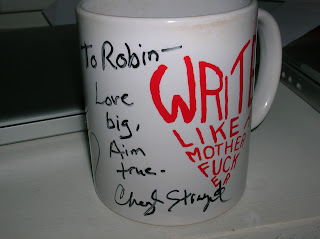 And damn! I wanted to add a photo at the beginning of this post, one of Randy Lagana's and can't. Not sure what is up with that. I've used it before on this blog. Oh well. I'll figure it out another time.