Hot water poured down the drain

This morning I boiled water for tea. I didn't immediately pour it into a thermos carafe to keep it hot for a few hours and warm for many more. I poured some into my tea mug, swirled it to warm the cold ceramic, then poured it down the drain before pouring more over the tea bag. Have water available at the turn of a lever is something I usually take for granted.
This past Wednesday morning, I drove the less-than-mile to our local volunteer fire house to pick up a case of drinking water and fill containers with hose water for washing. 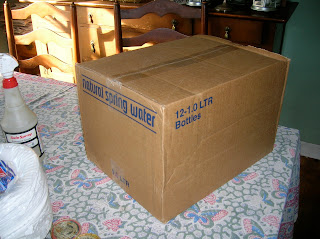 There was a one case limit, which was fine because it's only been my husband and me at home through this "disaster." I hadn't really prepared well for this storm, for various reasons that I'll go into shortly.
Back a couple of months ago, when Tropical Storm Irene came through, we'd had days to prepare, and I'd filled every suitable container I could find with drinking water, and some unsuitable ones. We collected pond water in a barrel for flushing toilets–though that wasn't so crucial because we set up a composting toilet like we use camping–and rain water (in a plastic bin) for use in our solar shower bag. We were without power for three days then, and there were four people in the house (this was a week before the kids went off to college). Though we could have gone and gotten water then, our power came on about a day before we needed it. I actually had some containers still filled. I didn't immediately dump them, but about a month later I did, because they weren't proper water storage containers.
Little did I know that I'd need those so soon. Two months later, we were faced with a "disaster" that has been calculated to be five times as bad (in respect to damage and power outages).
Now it was the end of October. I'd read there was a chance of snow on the weekend. We've had flurries this time of year before, even a little bit of "sticking" for a few hours. Some years it's been shirt-sleeve weather for trick-or-treating. This is New England after all, where if you don't like the weather, wait ten minutes, according to a Mark Twain saying.
Friday morning I woke up to forecasts of 6-10 inches of snow, and cautions that because so many trees still had leaves, that there could be massive felling of limbs and trees and resultant power outages. The hardships of Irene's aftermath fresh in my head, I was concerned. Unlike the end of August, snow meant cold. But my husband downplayed my "panic" and despite my better judgement (in hindsight), I ignored my very "bad feeling" about the approaching nor'easter, and did nothing to prepare on Friday.
He headed off on Saturday morning to drive two hours to where our kids are at school (he was delivering some things they needed and taking our son to an event as previously planned). The storm was supposed to start as rain, but instead, started off as snow. Heavy snow. Within an hour or so, we had 2 inches on the table on the deck. 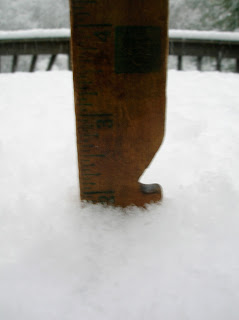 In the meantime, I'd started filling up containers with water. I boiled some and poured that into our thermos carafes. I filled the bathtub with water part way (something I didn't do last time). I baked a batch of almond  meal muffins (I should not eat wheat) as the power started blinking. While we had food in the house, it was the end of the pay period and stuff was low. It had taken me a couple of months to readjust my food-buying for only two people, and now that showed. Oh, we wouldn't go hungry–most of us have plenty of food on hand at any given time to survive quite awhile if we're not fussy–but my health-imposed diet is not one tailored for difficult conditions. By the time I knew that the weather prognosticators had been right this time, it was too late to head to the store. Our steep, uphill driveway was covered.
When the first casualty of the storm occurred–the old lilac pictured second in my post from yesterday–I started to get worried. I texted my husband and told him it was getting bad already, and that the lights had been blinking. As it got worse, and more and more limbs started to break and fall, each crrraaaacccckkkk made me flinch. Three summers ago, during a brief but violent thunderstorm, a huge willow fell on our roof. I was alone at home at the time (with my wrist in a cast), and had only moments before contemplated going out on the front step and watering plants. If I had of, the tree would have hit me. Our roof was badly damaged and was replaced. But ever since, I've been leery of the other tall trees (we can't afford to have them taken out) and as the afternoon wore on, I realized that I was suffering from a hardy case of PTSD.
My husband FINALLY headed back about 2:30pm, shortly before our power went out. I didn't want to call him (he was driving in treacherous weather after all), so  I kept texting friends and family, trying to maintain a tether to sanity. At times my resentment of his leaving me alone during ANOTHER very stressful event (don't get me started - it's happened many times) was almost overwhelming. I was also disgusted with myself for not minding my intuition (that "bad feeling" about the storm) and preparing for what would turn out to be the longest we've ever gone without electricity EVER (at home - camping doesn't count - I once lived for most of six weeks without electricity when I was younger).
We take so much for granted. When our power returned and the lights came on and the heat came on and we could turn a faucet and have running water, my body released tension that had been carrying it for days, and I was so exhausted that I could hardly read (in bed with a light on rather than a camping headlamp).
I love camping. I desire to live much more simply than I do now–that's what our Maine dream is about. But I depend on my "stuff." For the first couple of days I'm fine. It's fun to "make do" and cook on the camp stove (with a window cracked to prevent carbon monoxide build-up despite the sub-freezing temps). We ate well. I bundled up and wore a scarf and hat in the house, which got up to 57 on the sunniest, warmest day with the basement woodstove going full blast. It takes much longer to do simple tasks, like washing dishes, when you can't just fill the sink with hot, soapy water. Keeping clean requires a sponge bath in a very cold bathroom. One of my reading materials was When All Hell Breaks Loose by Cody Lundin, which was a gift to my husband from our daughter this past August (before Irene - how prescient of her).
What I found out is that I go into a mode of "just surviving" and lose interest in most other endeavors. Why bother? was my attitude. I had all the time in the world (not really) to write, but every time I tried, absolutely nothing came and it seemed pointless to me. As did cleaning and sorting items in anticipation of putting our house on the market in the Spring (so we can move to Maine). All my emotional dramas of the past few years seemed so totallyfuckinglystupid, that my disgust with myself just grew. But I did have a lot of time to think.
And what happened? Well, when the stress was released, I began finding my voice again.
But then, as I typed that, the power went back off for an hour and a half. When it came back on, the internet did not come with it. I'm typing this from a hotel in another city where I'm staying with my daughter who has an important interview. While she's in that, I'm visiting a friend. And taking advantage of hotel internet! This musing will be continued.
Posted by Erobintica at 11:54 PM

Email ThisBlogThis!Share to TwitterShare to FacebookShare to Pinterest
Labels: taking things for granted

Wow, such an adventure. I've never gone days without power (with the exception of camping when I was young.) I can imagine how much more difficult things must be without the conveniences of electrical power.

I look forward to reading more of your thoughts on life in the storm. Ours is so relatively tame. Six brief power outages, one tree limb of the maple in the back yard down, and some adventures in the old Isuzu shuttling people around.

I wish you a good weekend.

We camp out in the desert in the summer....for a few days at a time. I rarely think about winter storms. Our seasons are so mild. Your post gives me pause. I am a whiny baby! I complain about grey skies and weeks of rain. BIG DEAL :-) May you have a lovely winter, full of light and warmth and free of outtages, from now on.