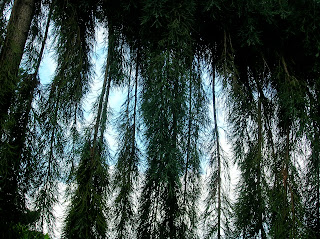 Lately, I've been having a great deal of difficulty finding my direction. Maybe it's because I find myself at some critical junctions of my life all at once and I cannot prioritize them. So, I start spinning. One minute I want to hide under a rock, not saying a peep. The next I want to get out there and try to change the world. Most of the time I'm somewhere in between, going round and round. But I've decided to write about it.
I'm going through  menopause, which doesn't help with stability at all, and the effect on my libido (where has it gone????) has, in turn, made writing erotica difficult, to say the least. I've always been the girl with the one-track-mind. To have that suddenly (because is sure as fuck feels sudden) change is hard to deal with. I'm hoping that once everything has settled down, I'll find my way again. In the meantime, the loss (temporarily I hope) of an important part of my self can be depressing. But I'm not going to just give up (though often I want to and even threaten to - sorry dear husband).
Though I believe a mother's "job" is  never done with her children, mine are all pretty much over needing me day-in, day-out. Yes, I've been a stay-at-home mom, even making lunches for my high school children. It's what I need to do. But soon my youngest will be done with high school and moving on to college (and he's having his own "what will I do with my life?" crisis thoughts). My oldest is married. The middle child is studying on the other side of the world (Japan) and I won't see her again until next July. My identity as a mother is shifting. Soon, my time will be more my own than it has been in more than a quarter-century. The last time I had this kind of freedom was when I was in my early twenties. Oh to know then what I know now. But I don't wish to go back.
With this change in focus comes the need to think about what I'm going to do from here on. I want to write, and will be able to (hopefully) devote more time to it. But I often have crippling self-doubt episodes which pretty much paralyze me. I should be doing something "real." Wanting to just sit and write is "selfish" and a waste of time (because it will  never amount to much). I know where these thoughts come from - they've been passed down generation-to-generation. And THAT is what makes me want to keep at it, to not give up, to break the cycle. Wish me luck.
With all this comes, looming on the horizon, moving our lives. We've been where we are, in this town, for just about 18 years. In this house for almost 17 years. Longer than anywhere either me or my husband has ever lived in one place or one house. We'll be moving to Maine, though when we don't know. But I find myself already mentally separating from this place. This house, this street, this town, this state. The crashed economy has made us change all our plans (aka dreams). We'd hoped to move into "something" up there when our son went off to college. That's not likely to happen. Next year my little writing cabin should be done, but I don't think even we could live together in a 10 x 12 one-room cabin for very long. But we need to get up there somehow. So I find myself in a sort of limbo, being one place and wanting to be another. This will be the first time in my life where a move was a conscious decision to move to someplace. Always moves have been because of the decisions of others (parents, husband) in reaction to jobs or house purchases. Most often it's been moving from. This will be different. Already is.
Life is strange. Maybe I'll start writing here more. I'd sorta wanted to keep this blog more erotic-oriented, but then I realized, it wouldn't be whole. This is my writing "home" and so there will probably be a change in tone. Maybe not though. Who knows?
Posted by Erobintica at 12:24 PM

Email ThisBlogThis!Share to TwitterShare to FacebookShare to Pinterest
Labels: erotica, just a bunch of nothing, menopause, pondering life

i m sure thats a "scary" point in your life..going through the menopause..going through all kinds of emotional trouble as well as beeing at a point where you have to re-design your life new...but..maybe it will be all a big and wonderfull adventure...

You will make it to the other side of the Big "M." It may take quite a bit of kicking, screaming, and gnashing of teeth, but you'll get there. And not to worry, you will enjoy sex again. You just have to listen to your body and give it what it needs at the moment. Right now, it may need to rest a bit. I like to think of menopause as decommissioning a nuclear power plant. It's still active, you just have to search deep for the power rods. (I just came up with that analogy so the lame reference will probably infuriate anyone who actually knows anything about nuclear power. Mea culpa.)

When I was going to college a few years ago, there was this little brick Cape that I'd pass on the way to class. It was empty and for sale for about a year. I used to fantasize that I bought it, all on my own. (I'm not sure where my husband and family fit into that fantasy but hey, it was my dream, right?) There were pictures on a real estate website of the inside of the house, and the sunlight fell on the hardwood floors in one of the bedrooms just so--the perfect writing space. The house was close to work and school and the yard was the perfect size for me to maintain. I was kind of sad when it finally sold. It was like, strangers were moving into "my" house.

I wonder if the thought of running away has more power than the actual act of fleeing. Something to ponder.